Celtic gave their followers a very happy Ne'erday at Celtic Park when they triumphed over the old enemy by three goals to nil. Rangers were very soundly beaten, and from the time Celts scored their second goal six minutes after the restart the Ibrox team were finished, and never looked like pulling up.

The "Light Blues" were a very ordinary lot, being but a shadow of former Ibrox teams. Right from the start the Cup-holders took command, and gave Rangers' defence a gruelling time. Simpson found Crum just too elusive for him, while Murphy brought out all Gray's abilities.

After 38 minutes Celtic went on the lead deservedly. Divers got the ball from Crum, and, getting it quickly under control, beat two men with a quick turn, and drove in a shot which Jenkins was powerless to stop.

Rangers retired at half-time rather fortunate to be only one goal in arrears. The Cupholders restarted in hurricane fashion, and laid immediate siege to Rangers' goal. After six minutes Crum was going through, when Simpson handled, and McDonald made no mistake with the resultant penalty kick. Jenkins got his hands to the ball, but could not stop it. McPhail and Smith tried very hard to pull the game out of the fire, but Fiddes, Kinnear, and Venters did not respond.

The "Light Blues" defence was overrun by clean and clever forwards who played brilliant football, and were helped to do so by a confident defence. Divers made the total three with a smartly taken goal 17 minutes from the end. Rangers were strong in goal and at back, but the wing half backs were never at home against the fast raiding Celtic attack. McPhail was the only Rangers' forward who looked like doing anything, but he lacked support. The Cup-holders were strong in all departments, with Crum. Divers, and McDonald best in attack, and Hogg, Lyon, and Patterson in defence.

There were unprecedented scenes at Celtic Park, Glasgow, where Celtic and Rangers played. Over 80,000 spectators were present when the gates were closed before the kick off, .and many could not gain admission. Half-an-hour before the game commenced there were huge queues at all the gates and mounted and foot police had considerable difficulty in controlling the crowd. It was estimated that close on 10,000 were locked out while many people inside the ground who were unable to see the match demanded their money back.

So serious was the crushing within the ground that ambulance men were kept busy throughout the game, and at two sections of the terracing at the west end of the pitch hundreds swarmed on to the track for their own safety. Over 50 persons were attended to by St Andrews Ambulance Association for crushing and fainting.

The game itself was eight minutes late in starting apparently to enable the large crowd to settle. During the first half the swaying of the dense mass of spectators directly behind Celtic's goal was ominous particularly when each goal was in turn bombarded. The first break-in by the crowd on to the playing field took place shortly before the game had started, and about twenty minutes later the barriers between the stand and the west end goal were rushed. In a few seconds there was a large crowd on the track, while a number of boys dashed behind the Celtic keeper's goal, and had to be chased back by the police.

When Divers scored, six minutes from the interval, the swaying started again, and people jumped the barrier for safely. There were many women among the spectators and a number of them were among the casualties. Fears that a serious mishap might occur were increased when a crush barrier collapsed at a section of the terracing where thousands of Rangers supporters had gathered. No one was injured in this instance. 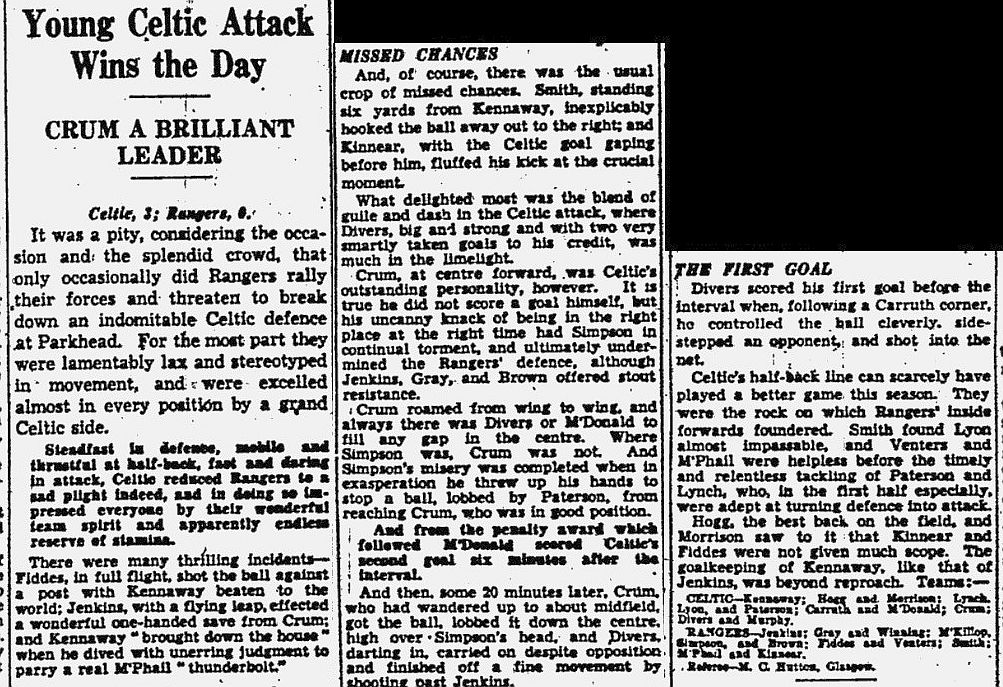