History of the Celtic Wiki

This Wiki followed as an extension of the Kerrydalestreet (KDS) forum, and was given the honour of the full “www.kerrydalestreet.com” address, whilst the forum kept the “.co.uk” name. The forum was the brainchild of KDS forum founder Fitzpas in order to create a user-friendly and easily updateable and accessible encyclopaedia on Celtic.

So in May 2006, Fitzpas signed up with Wetpaint’s “Wiki” site and invited a handful of people from the KDS forum to help work on it.

Following a few months of hard graft to get the project off the ground, this Wiki was made live in around October 2006 and has since grown steadily, and is well known as the first place for Celtic info also away from the main Celtic football forums. As well as Celtic fans, this site has been used by various authors, newspaper journalists and other football clubs (e.g. Liverpool FC) for information & assistance, and even an ex-player assisted by creating the biog for his own page!

You will commonly now see the site referred to in references in Celtic books and other articles on Celtic, which is something we are very proud of. This is a site we wish everyone to be able to use for the benefit of the support.

No subject is too big or small, and the site covers a whole multitude of areas on the Celtic experience. We hope it brings back memories for everyone.

In April 2010, ‘TheHumanTorpedo‘ from this site, began a new section on the CelticUnderground podcast, basically a short retelling of a player or event from Celtic’s history to help spread the word on the club and the site. It became a very popular addition and very much appreciated. A collection of the tales can be found here (see link).

In May 2010, the site obtained the new address “www.thecelticwiki.com” and rebranded as “TheCelticWiki“. The reasons were mainly to be able to differentiate it from the main forum but also as this site had become increasingly referred to as “The Celtic Wiki” in the forums. So in recognition of this we decided on the new web name & address.

In July 2013, WikiFoundry took over the wikis from Wetpaint, taking the traditional platform with the aim to build on the great work done in the past across all online Wetpaint wikis. We are thankful to Wetpaint for their support over the past number of years.

On 1 June 2021, WikiFoundry’s platform ended, TheCelticWiki was transferred over to WordPress. We are thankful to WikiFoundry for their support over the past number of years.

The site continues to grow and provides entertainment as well as interest for all. All contributions are always gratefully received.

The article below from 21 Aug 2007 from “wetpaintfreshcoats” has shown that the site is appreciated and respected by more than just the Celtic crowd, but we believe it can always get better (so if you have an idea then get stuck in!). 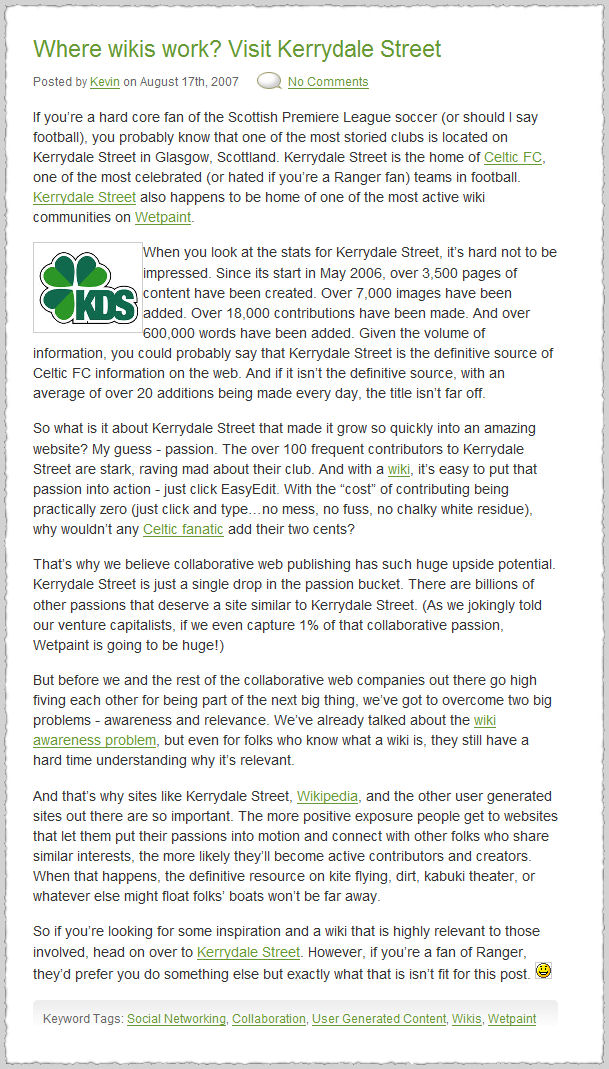 “Top Ten for Most Influential Celtic People on the Web”

In August 2007, Wiki admin Dianogah was selected in the “Top Ten for Most Influential Celtic People on the Web” for all his hard work on the site by respected website “Celtic Underground”, a well-earned accolade.

The Honour was an annual event and contributors from this site were regular entrants in the list. Dianogah naturally for his continued work on the site, Auldbhoy for his work on the main forum and the wetpaint site for the “Man of the Match” surveys during the season, and TheHumanTorpedo for “The Soul of Celtic” articles. All worthy and much deserved.

In July 2008, in the first 2008 Wetpaint Golden Paint Can Awards, Kerrydalestreet.com was voted by its peers in a community voting system as one of the top Wetpaint sites on the net, winning the “Fans gone wild” category.

A very truly well earned award, with many thanks to all those who voted for us.

Following the awards, Wetpaint advertised the winners on the multitudes of Wetpaint wikis it is parent to, and proudly displayed the following banner for our own efforts.

In the 2009 Wetpaint Golden Paint Can Awards, this site was nominated in the new “Sports” category, and won the “Sports” award as voted by our peers in the community voting system. Another proud moment for the site.

A very truly well earned award, with many thanks to all those who voted for us.

In the 2010 Wetpaint Golden Paint Can Awards, this site was nominated in the new “Sports” category, and won the “Sports” award as voted by our peers in the community voting system. Another proud moment for the site. This was despite a concerted campaign by some non-Celtic forums to derail it! The award is dedicated to John Condron/Auldbhoy who was a major contributor on this site but sadly passed away at the end of 2010. He is heavily responsible for the site winning this award, and it’s in his honour for us.

In the 2011 Wetpaint Golden Paint Can Awards, this site was again nominated in the “Sports” category, and for the first time we had won the double!!!!

Once more won the “Sports” award as voted by our peers in the community voting system but also for the first time we’d won the “Judges” prize.

It has been a testing time since the passing of John Condron and we dedicate this to his memory and to all the contributors big and small who have played a part to help keep this forum updated and filled with info & data for everyone’s reference.

A very truly well earned deserved set of awards, with many thanks to all those who have supported us over the years.

Below are the various mastheads we have used on this site since inception of the site.

Fan of puns and wordplay, rejoice!

The Champions League final between Real Madrid and Atletico had it all.

For the most part, all that it was missing was a tweet which contained such genius wordplay, you feel compelled to stand up in your living room and applaud. Until now, that is.

Using the song San Francisco by The Mamas & The Papas as its base (you’ll recognise it once you read out the tweet), it’s a excellent display of teamtalk wordplay…

“If I was Zidane I couldn’t resist giving the instruction: “If you’re going at Juanfran, Isco. Be sure to wear some flowers in your hair”” — Celtic Wiki (@TheCelticWiki) May 28, 2016