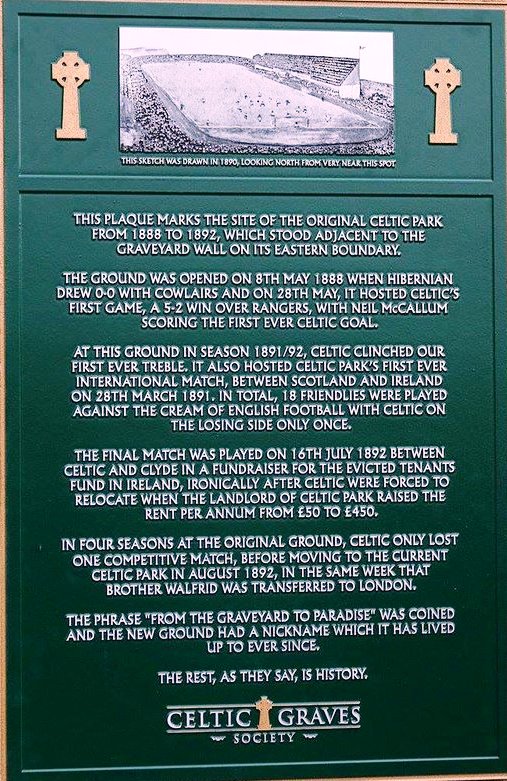 Being a nosey so and so, I always wanted to find out who the original landlord of Celtic Park One was. We’ve all read about Lord Hozier and how he had rented Celtic Park two to us and then sold the land to Celtic in 1902. But, who was this original Scrooge, who had increased our rent nine fold within the period of 4 and a half years?

When I started my search in August 2011, I was new to research and my skills were fairly basic. My determination to find the landlord was bourne from my quest to find as many images of Celtic Park One, that I could. So I did the most simplest of searches, which was searching the Post Office directory of 1880 to 1894. I concluded that using the intersection of other streets with Dalmarnock Street, then I could roughly work out who had owned the land. Through my research I had concluded that Peter Abernethy was the landlord, but, this proved to be wrong and I was only going through street numbers. I also went to the bother of meeting an Abernethy relation, who showed me an old picture of a cricket game, it had heavy industry in the background, but, it wasn’t the original Celtic Park.

Through reading Kerrydale Street, I found out about the Celtic Graves Society and in November 2011, I approached them with my findings. All were very receptive to my work and from there I found out about the Mitchell, level two, the Glasgow Room. From speaking to the archivists and researchers there, they told me about Land Registry, Sasines and searching for building plans. This is where my research took off.

So, I went to the Mitch and searched through all the years from 1878 and 1896. Knowing that the original CP one had been replaced by tenements, I looked for who had bought and sold the land. A name that always popped up was CS Robertson, who lived at Ivy Cottage, which bounded Celtic Park one to the North West of the site, he was the superintendent (janny) for the Janefield Cemetry. So looking through the Sassines, I found that a Thomas McDougall, had bought land and created a street called McDougall Street, which, later became Malcolm Street, which ran through the 18 yard box of the original Park. I thought I had found the landlord, it was either CS Robertson or McDougall. Below is The Sasine, but, it wasn’t the land sale, but, a trust being executed. 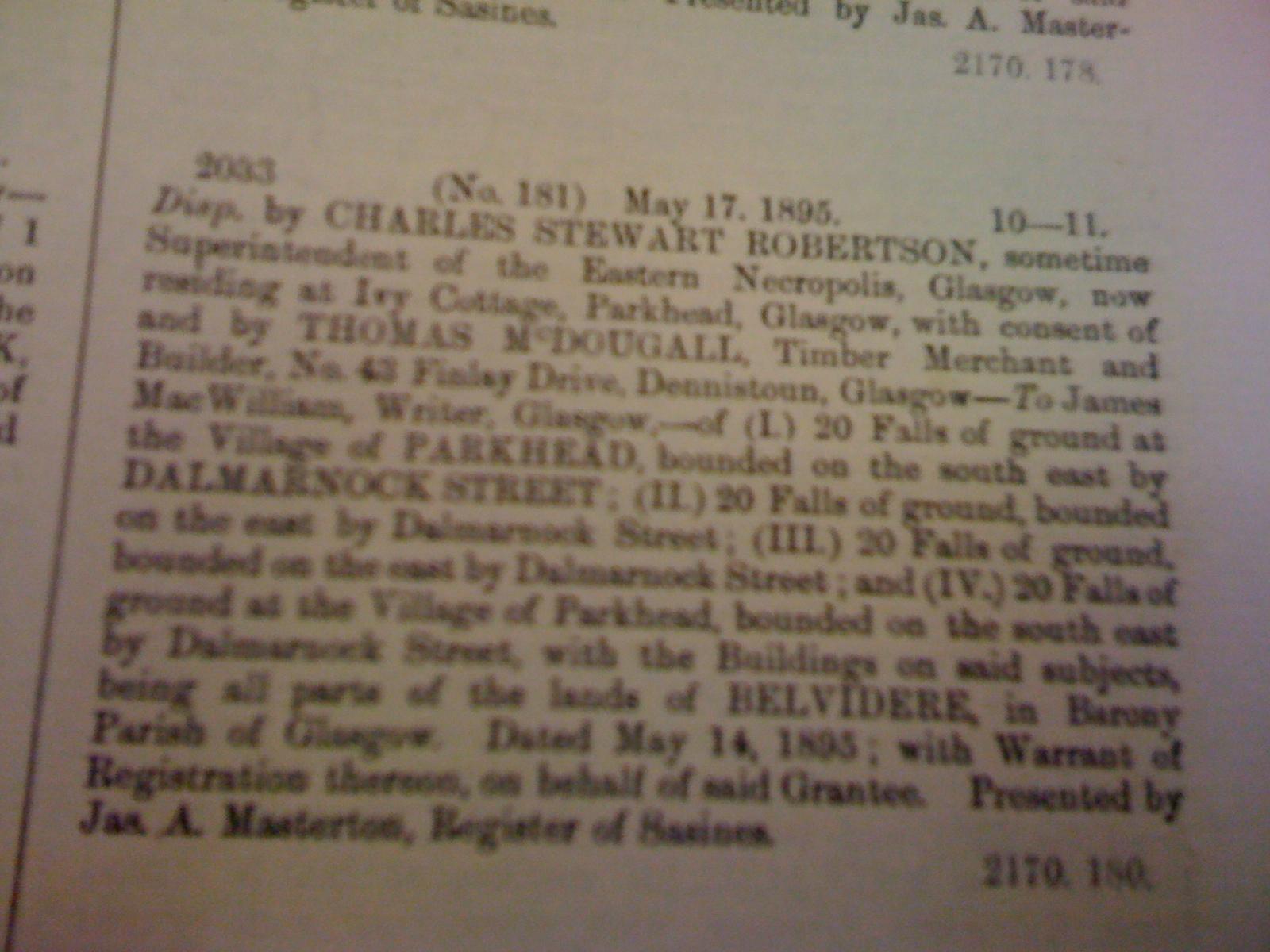 So thinking I was the bees knees and having found our original landlord, I then searched for the building plans of McDougall Street (there are no plans for CP one, more’s the pity) 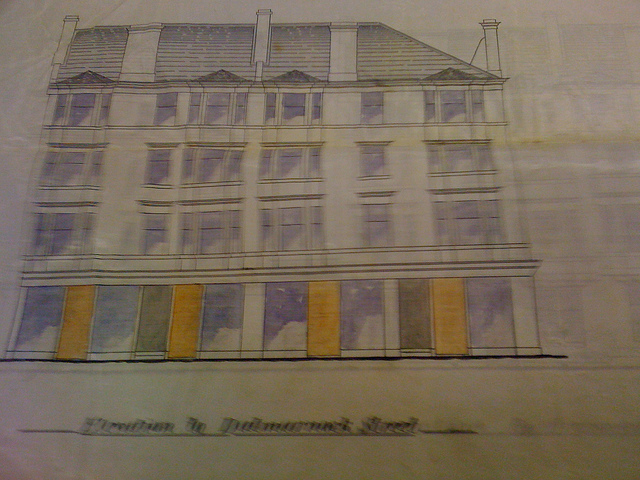 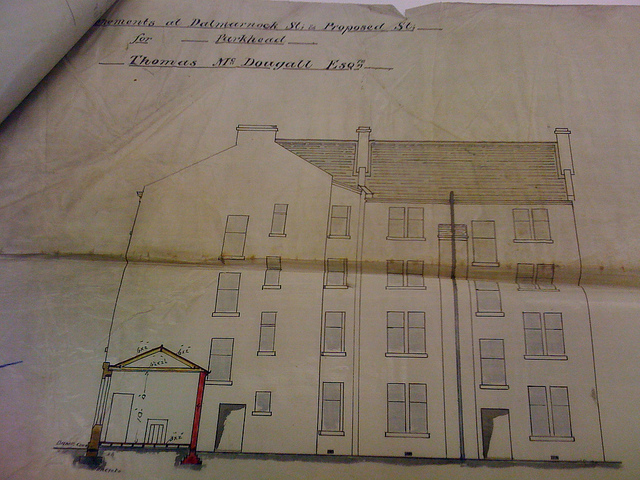 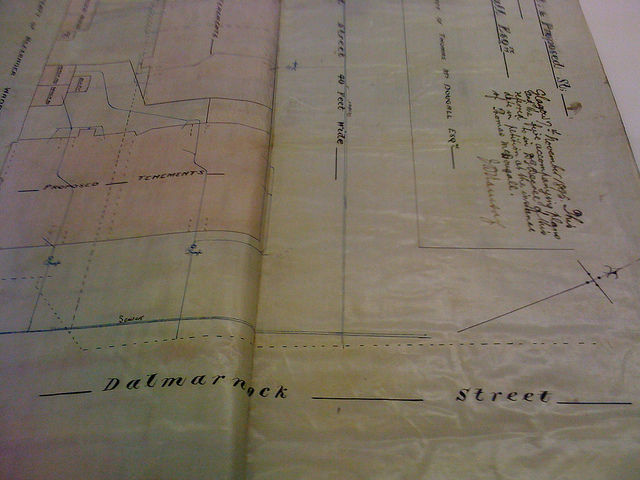 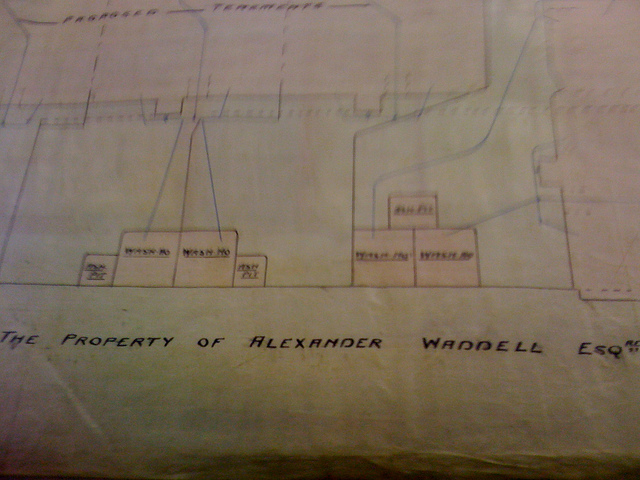 Having looked at these plans, I then discovered that another man owned land both to the north and south of McDougall Street. An Alexander Waddell. Who in the name of God was he?

So, I got the land registration owners book and found an interesting entry between 62 and 82 Dalmarnock Street. It didn’t have a number just a dash. It said Peter Young and Sons for Alexander Waddell. I asked the Dr Irene O’Brien what this meant, she told me this was the land behind Dalmarnock Street, it was 8 acres, Celtic Park One had 6 and a bit, finally I was on the right track. 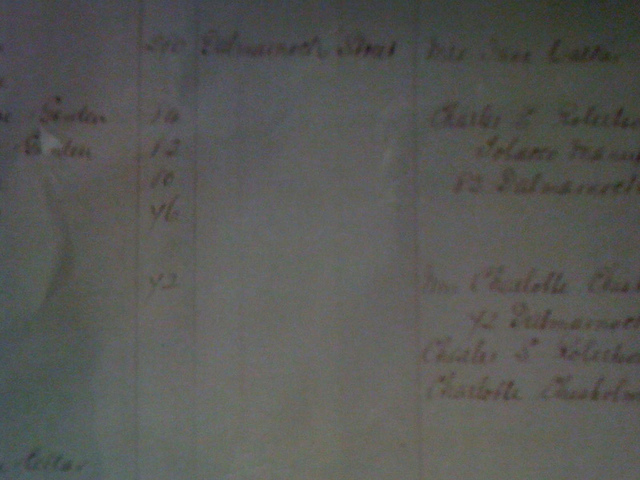 I started to look up more Sasines and found this about Whinny (or Whinny, Wheiny Park, which was directly to the North of CP one and that some Graves members think was what CP one was originally called, when Oxford used to play some of their home games there, before Celtic had it). 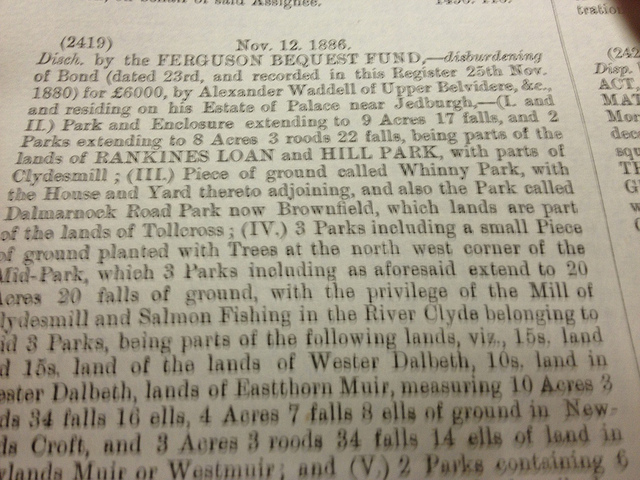 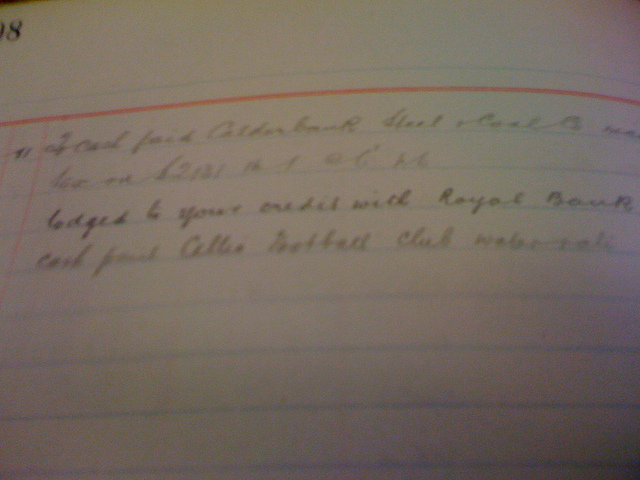 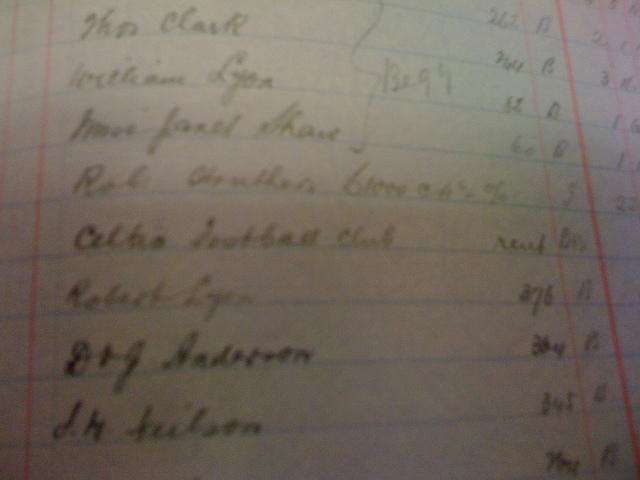 So I now knew Alexander Waddell was Celtic’s original landlord, now to find the proof of the land purchase. So a trip to Edinburgh it was to get the full Sasines 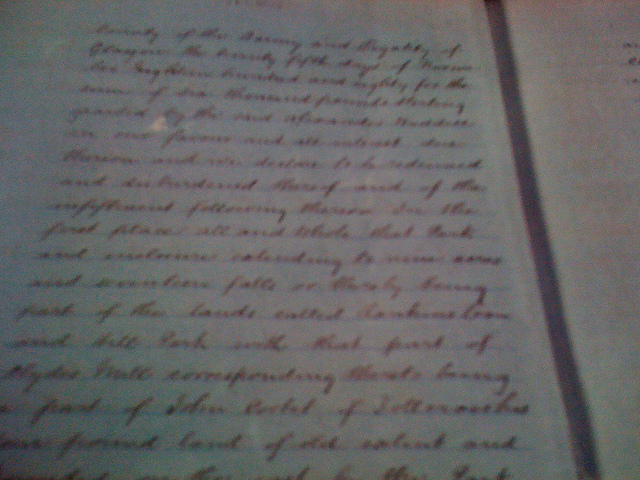 Above is an example of some of the land he bought around the Parkhead area, the below are the proof.

Now I had found the landlord, I wanted to know what Celtic Park one was called before becoming CP One?

Now, i’ll need to type out what this picture below, actually says. 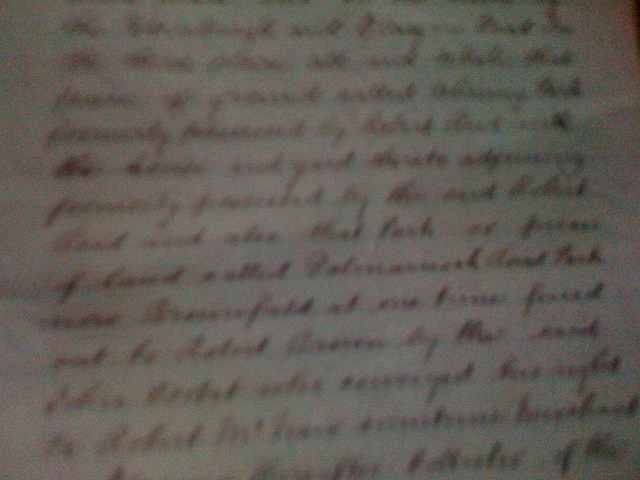 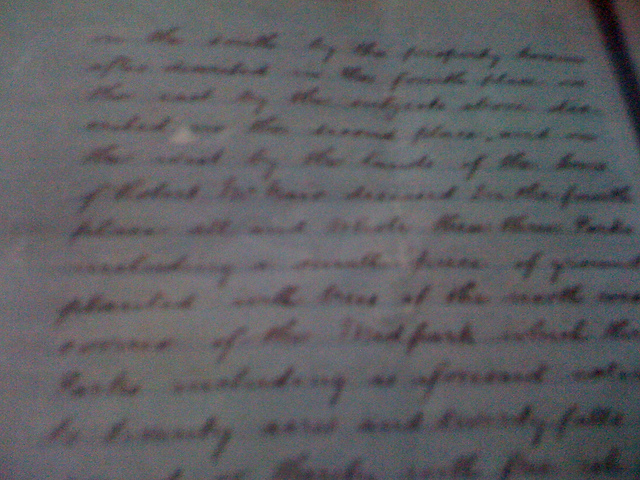 the whole of that land called Whinney park, with the house and yard, once possessed by Robert Reid and also that park or piece of land called Dalmarnock Road Park, now called Brownfield at one time being feued out to Robert Brown by John Corbett of Tollcross,who conveyed his right over Robert McNair.The land is bounded in the north, by that great turnpike road (Parkhead Cross) leading from Glasgow through Camlachie, on the west by the lands of Jeanfield, possesed by the heirs of Robert McNair and on the east by the land of described subjects and to the south by the subjects in the fourth place. These three parks extend to 20 acres and 20 falls of land

The fourth place, was a piece of land bought by J McLehose of Newlands (Hozier) from Gilbert Hamilton.

Now, I didn’t realise this at the time, but, this agreement was written and signed by a CS Robertson 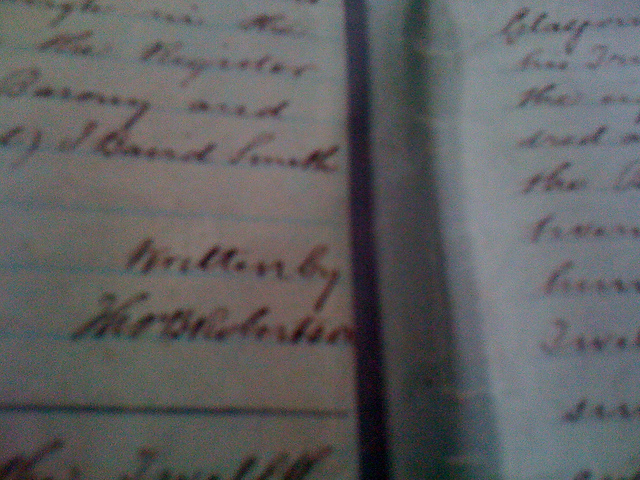 So, basically what I am saying is that, we could’ve been called the Whinney Park Wanderers, playing at Whinney Park, in which, was contained a field called Dalmarnock Road Park, but, by 1886, known as Brownfield.

As an added bonus to myself, the last pic is Alexander Waddell, selling off part of the old CP one in 1896 to Caledonia Railways. 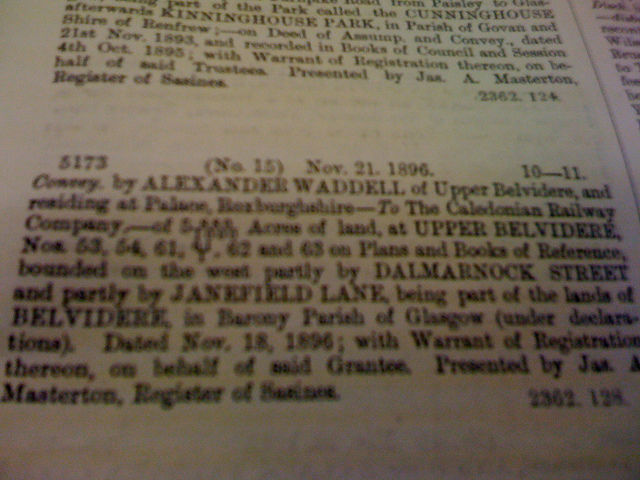 So, to conclude our original Landlord was Alexander Waddell, who lived at Palace in Jedburgh. He was originally from Upper Belevedere (Parkhead) and owned much of the land in the area. He was also the Chairman of the Eastern Necropolis Cemetry (Janefield)

Here is a little post from the Scottish Athletic Journal of Feb 88, about our pitch, a few inaccuracies, but, the sentiment is correct

“A club composed exclusively of Irishmen, and Scotchmen of Irish parentage, has been started in the East End somewhat similar to the Hibernians in Edinburgh. The name of the new club is to be “The Glasgow Celtic Athletics.”
A ground has already been secured in Dalmarnock Road, and it is to be called Dalmarnock Park. They have taken it on lease for five years at a rent of £30 a year.
It is a splendid field, with plenty of scope, and includes a couple of pitches, one being for practice. There are to be two stands – now in course of erection.
The club intend to draft the best players from the surrounding clubs. Of course the players must be Irish or of Irish extraction. They mean to have an eleven second to none.
An effort will be made to open the ground at the end of the present month, and if a fixture can possibly be arranged between a Glasgow club and Hibernians, these clubs will be the first to compete on the ground. As the club has influential supporters and no lack of means, the necessary guarantee will be forthcoming.
Failing a fixture with either of the above clubs, some other notable teams will be invited for the preliminary match.
A cinder track, 12 feet broad, runs round the field. The committee have held several meetings to discuss affairs in a hall in East Nile Street”