Newspaper Report of the Fire in 1929

The blow is a particular severe one in the view of the fact that not only was the whole of the club’s equipment burned, but many photographic records of the club were destroyed, It will be a easy matter to replace the football gear, but the valuable old pictures cannot be replaced.

The outbreak was discovered shortly after nine o clock by some workmen engaged in the demolition of the Grant stand, which is on the opposite side of the field. They immediately raised the alarm, but so rapidly did the flames spread that practically a hour all that remained of the erection were some iron beams and support.

On seeing the flames burst through the windows of the pavilion the workmen rushed across the field and burst open the door with the intention to do all they could pending the arrival of the brigade. So dense was the smoke that poured through the pavilion, however, that they were unable to get to the seat of the fire.

The pavilion was composed almost entirely of wood, and the flames spread with such violence that by the time the brigade arrived the building resembled a well light torch. Little could be done to save the erection, and it was impossible to rescue any articles from the room in which they were lodged.

Celtic have been singularly unfortunate with their buildings, Some years ago, following a Celtic-Rangers game at Parkhead, a stand which was alongside the pavilion took fire and was burned to the ground. On that occasion the firemen were able to prevent the fire from spreading to the pavilion.

While the club’s gear and record’s were involved, it is understood the teams cups or shields were not involved in the conflagration. As has already been stated, work is proceeding at the present time with the demolition of the Grant stand. The latter building, which was also largely composed of wood, was found to be inadequate for existing conditions.

Viewed in the afternoon, Celtic Park presented a somewhat pathetic spectacle, and would prove especially so to any keen partisan of the club who wandered into see the devastation caused by the fire, On one side of the field was the partially dismantled grand stand, and right at the door on the Janefield side was the blackened ruins of what was once a old-fashioned but cosy pavilion. Charred wooden remains lay around, and on a half burned wall was still fastened the familiar notice which barred from the precincts all but players and officials, Were the front wall of the pavilion was wont to exist was a sodden mixture of burned wood, out of which standing at a dizzy angle the clubs safe and the remains of a easy chair.

Many hopes centred around that safe, The heat had cleared it all of pain, but, with the exception of a slightly dented piece on one side, were it had struck a radiator when falling down from a second storey to the ground. It appeared to be intact. And in that safe, a “Times” reporter was informed, were the valuable old records of the club, going back to the days when enthusiasts in the Parkhead district set out to obtain a field on which to play football and raise what money they could on behalf of the Sisters of Charity in Parkhead and other deserving institutions.

The loss of these books would have amounted almost to a club calamity. There are still many people that remember the formation of the team in 1888, but with the loss of the records it would practically be a impossibility to have at any time compiled a authentic history of Celtic. At the same time many fine old photographs went up in the pall of smoke. These included a group of the original Celtic team, the first Celtic team to win the Scottish Cup. the first Celtic team to win the League Championship. and single photographs of Micky Dunbar, J.H.McLaughlin, John Glass, and other men who were prominent in the early days. 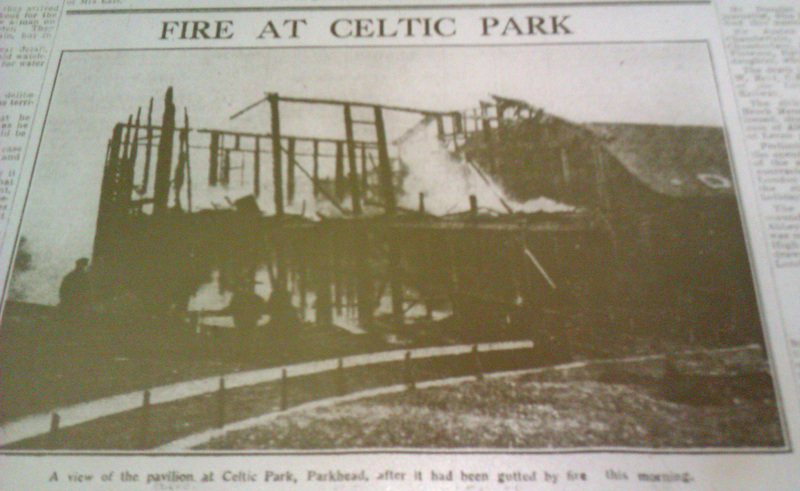