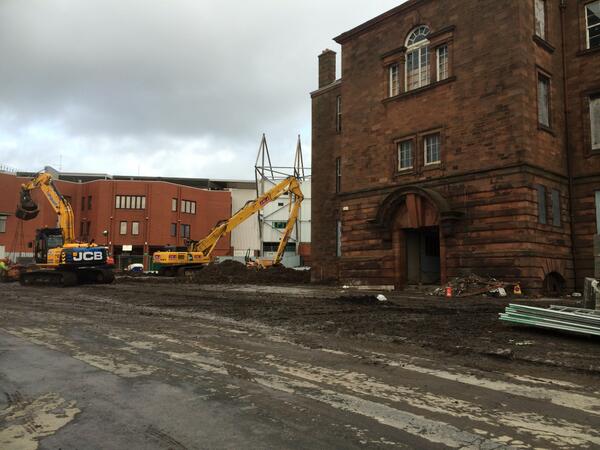 November 13th 1887: The newly formed and ambitous Celtic Football Club lease six acres of vacant ground between Janefield Street cemetery and Dalmarnock Street (now Springfield Road) as the site for their new ground. (The site would later become the Barrs factory and is now a new housing development).

May 8th 1888 – After months of hard work the new ground is opened with a special challenge game between Edinburgh Hibernian and Cowlairs. The match is watched by a crowd of 5,000. The new ground has nine admission turnstiles, an open air stand and primitive banked terracing made from earth mounds. The playing surface is 110 yards by 66 and is surrounded by a narrow track.

1892 – The club decide to move from their original home after the landlord announces an increase in rent from £50 per year to £450. A former brickyard a short distance across Janefield Street is identified by the club as the location for their new home.

August 13th 1892– A huge effort sees the brickyard converted into a fine stadium. More than a 100,000 cart loads of earth are needed to fill the brickyard’s crater but after hundreds of volunteers dedicated weeks of work the new ground boasts a lfine playing field, athletic and cycling tracks, a 15 tiered stand the length of the Janefiled Street side and a fine pavilion. A Celtic Sports event is staged and the ground hailed as an excellent venue.

1894 – Record-breaking crowd of over 40,000, described by The Times as ‘without precedent’ and garnering £2,648 in ticket receipts, see England come from behind twice to draw 2-2 with Scotland at Celtic Park in an Association International.
1894 – A special structure within the ground is errected for journalists to sit. This primitive structure is the first example of a press box at a British stadium.

1894 – Great Storm Of Wind & Rain – £400 Damage to Celtic Park. The velocity of the wind at this time was 68 miles an hour, which makes the storm a record one… £400 Damage to Celtic Park While the storm was at it’s height the handsome athletic enclosure of the Celtic Football Club, Glasgow, sustained considerable damage. The covered grand stand which accommodates 4000 spectators, was completely wrecked, large portions of it being blown into Janefield Cemetery.

1895 – Turnstiles are installed at Celtic Park for the first time at a cost of £445. The work is conducted by Lancashire engineering firm W.T. Ellison and Co who hail the new turnstiles as state of the art.

1898 – Director James Grant, with permission from the board, builds a lavish private two storey stand on the London Road side of the ground. The luxury stand boasts padded seats and windows which can be shut if it rains. However condensation means the windows are useless and are later removed.

1904 – The 3,500 capacity Janefield Street stand and pavilion are destroyed in a fire. The club purchase the Grant Stand from James Grant.

1905 – A covered enclosure is built in place of the destroyed Janefield Street stand.

1914 – The cement cycling track is converted into terracing and Celtic Park’s capacity increased to 25,000.

1929 – Another fire destroys the Pavilion. The Grant Stand is demolished and the club employs Glasgow firm Duncan and Kerr to construct a new stand which is opened on August 10th when Celtic defeat Hearts 2-1.

1952 – Following safety concerns from Glasgow magistrates three new passageways are created on the east terracing – the ‘Rangers/away’ end of the stadium – to allow for easier access and exit.

March 1964 – Celtic announce the launch of Celtic Pools as a means of raising money to pay for team development and ground improvements.

1966 – The Janefield Street enclosure – known commonly as the Jungle – is extensively renovated with a new roof and concrete terracing installed.

1968 – The terracing on the east terracing is concreted and covered.

1971 – Major redevelopment work is carried out on the main stand with a new roof – including suspended 100-capacity press box – and extra seats. The new capacity of the stand is 8,686.

1977 – Celtic sue the architect and civil engineers that had carried out the renewal work on the main South stand.

1985 – Undersoil heating is installed and new turnstiles are added at the Janefield Street and west terracing parts of the ground.

1988 – To celebrate the club’s centenary year a new facade is built on the main (south) stand. The red brick facade is part of a development which also sees new hospitality and restaurant facilities built along with a new glass fronted entrance foyer and executive boxes.

August 1991 – Two large electronic scoreboards are erected onto the roofs at each end of the ground.

April 1992 – The Celtic board announces plans to quit Celtic Park and to move to a new £100 million futuristic 52,000 all seater arena in Cambuslang. The plans unsurprisingly, turn out to be empty promises and a desperate smokescreen created by a discredited board.

June 1993 – A special challenge game is played at Celtic Park to bid farewell to the ‘Jungle’ which will no longer be a terraced area come the start of the new season.

March 1994 – Fergus McCann assumes control of Celtic and announces the club will stay at its present home which will be redeveloped into a 60,000 all seater stadium.

5 August 1995 – The new North Stand is officially opened by Rod Stewart and the Bhoys return to Celtic Park with a friendly game against Newcastle United.

August 1998 – The Jock Stein Stand is open and the redevelopment of the stadium is complete.

23 July 2014 – Celtic Park hosted the spectacular opening of the Commonwealth Games in Glasgow.