In writing these Reminiscences, it occurs to me that I cannot do better than write them out under the following headings, the Place, the People and the Pastimes of Parkhead, commencing as far back as I can remember, say about 1850. I would then be about 5 years of age, having been born on 3 June 1845.

Parkhead was then in 1845 a small weaving village in the east of Glasgow, about two miles from the Glasgow Cross. It consisted of one main street running east and west, called Great Eastern Road and another called Westmuir Street, running due east from the Sheddons (Parkhead Cross) with other streets converging on the Sheddons (cross) such as, Dalmarnock Street, Burgher Street, New Road now Duke Street, west from the Sheddons, we come to Elba Lane, Reids Lane and Stewarts Lane, on the Southside and Burn Road on to the Northside at what we call the west end.

The houses in this direction, especially on the south were mostly one storey on the north they were mostly two storey, many of them thatched and some tiled with red course tiles but these coverings for the houses have now almost totally disappeared and have given place to the more modern and artistic slate covering.

There were few shops for the sale of goods in this small stretch of the Great Eastern Road which we may call the west end and they were of the most unpretentious character. Window dressing had not in those days attained the excellence it now has when it may be considered one of the fine Arts. You might come across a bit small window packed with an indescribable assortment of miscellaneous articles without regard to either time or place, mostly appealing to the juvenile fancy for purchasers, such as, half-penny keek shows, marbles (bools), of various colours, Tops, Peeries, false faces, and valentines. ‘Old Brody’s’ was perhaps about the only shop that made any pretence to supplying the general wants of the community.

It stood almost on the identical site of the Clydesdale Bank of the present day, facing the top of Dalmarnock Street (Springfield Road). This with the exception of two or three bits of small green groceries was about all the facilities there were for purchasing the necessaries of life, while in the same stretch there were four pubs on the opposite side. All I remember were another pub and a butcher shop. The rest were hand loom weaving shops.

Dalmarnock Street runs south from the Great Eastern Road it was anciently called dry thrapple, but why it was so called I cannot tell. Even in my early days it hardly ever got any other name than dry thrapple, especially among the older people. It consisted then principally of one story houses, mostly of one room and kitchen, entering off the same close as a four loom shop. Some four loom shops had the house above, which were attics, some which still remain.

On the west side of the street was a wide and deep goat or ditch, with a fairly high hedge, beyond which were little patches of garden ground, then the houses and larger garden spaces behind. At the top nor-west corner was a large open space called Gib’s yard, usually containing a large stock of timber, among which we youngsters used to play at some little risk of getting injured, and not infrequently of being chased. Off this street, near the site of the palatial Newlands school, was one of the finest wells in the whole neighbourhood called ‘Carrick’s Well’.

The water was good and plentiful, even in times of extreme drought, but my impression is that it was a private well, and was situated in one of the gardens, outsiders probably having to pay a small sum for a supply. I have been told that in later years when digging for the foundation of the Newlands School the workmen struck the source of this well, and it was only after great trouble and considerable cost they overcame the difficulty of stemming the flow of water into the foundation.

The last houses on this side of the road going south were three or four neat little cottages and beyond that a fairly large sized park, where in later years I used to herd. On the other side of the street, the east, there was nothing remarkable apart from a number of weaving shops, and an opening or lane called ‘The Stiles’ a nice little rural pathway that led into Burgher Street. This has been swallowed up in the present Dechmont Street, and large four storey tenements, which are continued down the east side of Dalmarnock Street to the Caledonian Railway round and along Thomson Drive (Whitby Street) to the Coach Road (Helenvale Street). 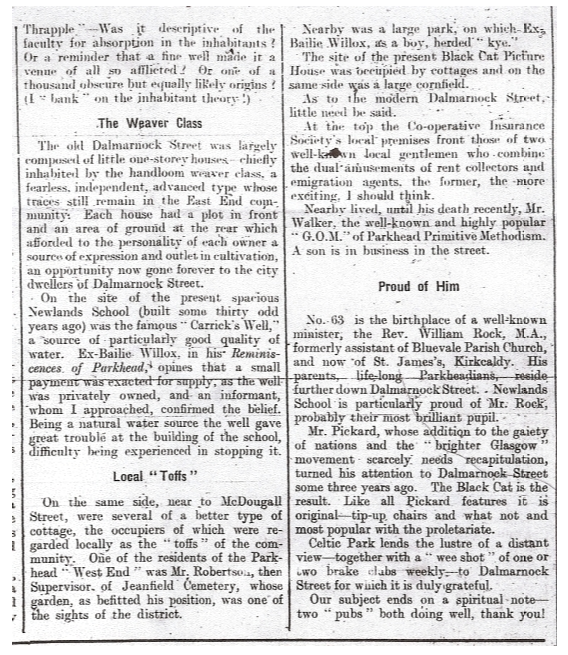 Above Excerpts from Local Historian David Willox’s “Reminiscences of Parkhead” 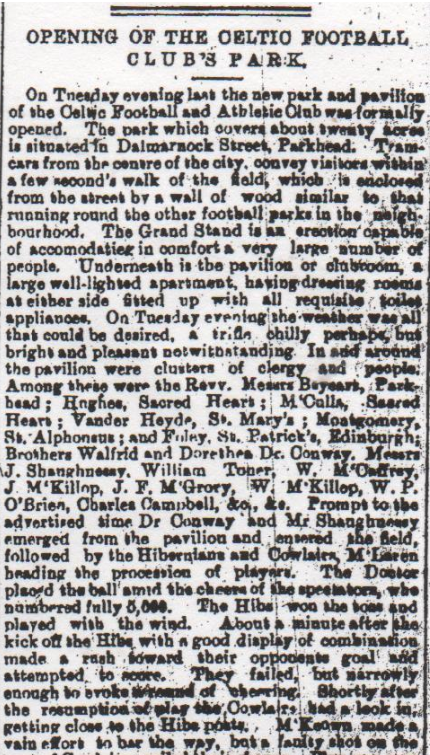 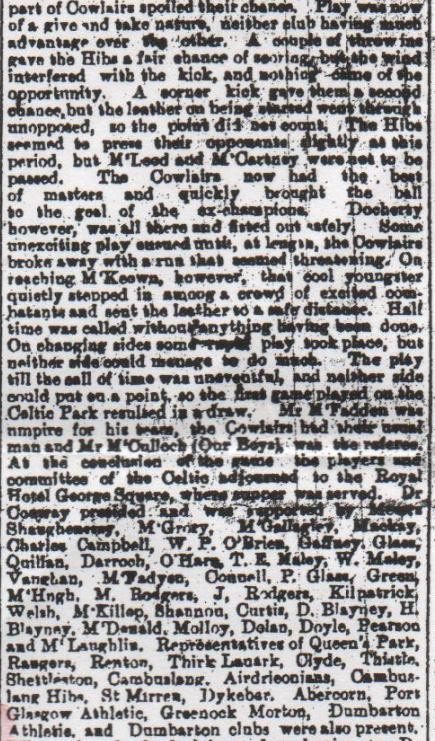 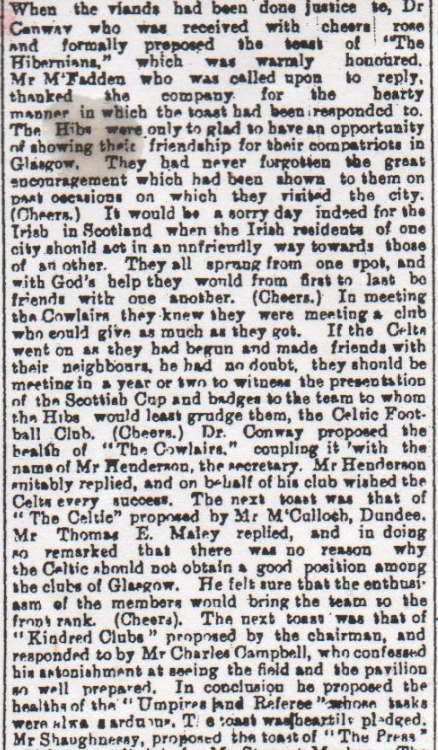 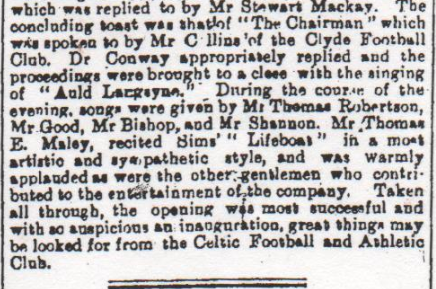 Celtic Park One or CP1 what happened to the ground after Celtic FC left and moved across the road in 1892? 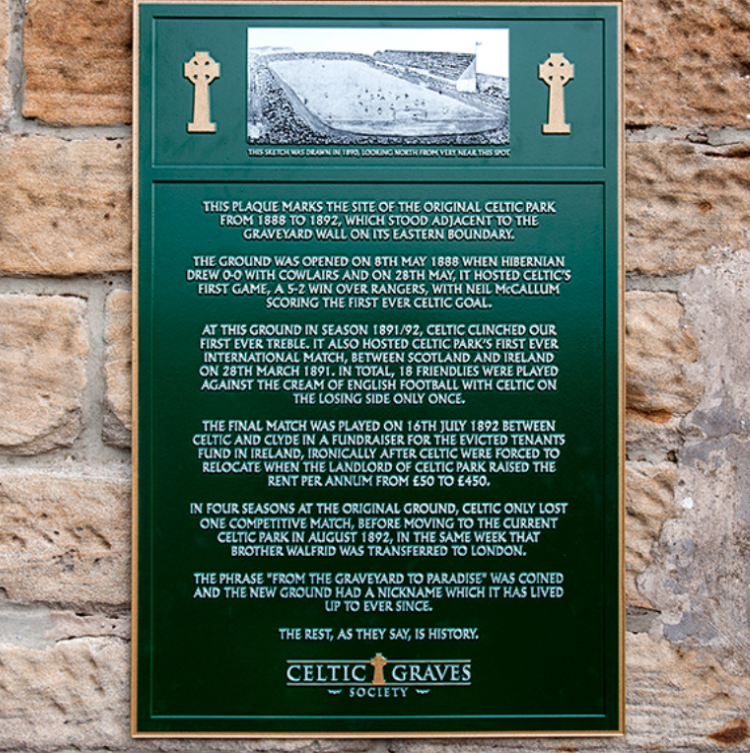 Our very last match was against Clyde on the 16th July 1892, the game ended in a 1-1 draw with Johnny Madden the Celtic centre forward scoring the last ever Celtic goal in the old ground.

(It may have been the last Celtic goal but was it the last goal scored?) Apparently not.

As history tells us we moved because the greedy landlord upped the rent 9 fold from £50 to £450. Ironically that last match played at CP1 was in aid of the Evicted tenants fund in Ireland, so what did this feudal landlord Andrew Waddell do with the football ground?

My research tells me he actually had it advertised while Celtic was still playing. 29th June 1892 a few weeks before Celtic played their last game the factor had a advert in the Glasgow Herald.

So the ground is being advertised using Parkhead Railway Station across the road as an enticement for future business. 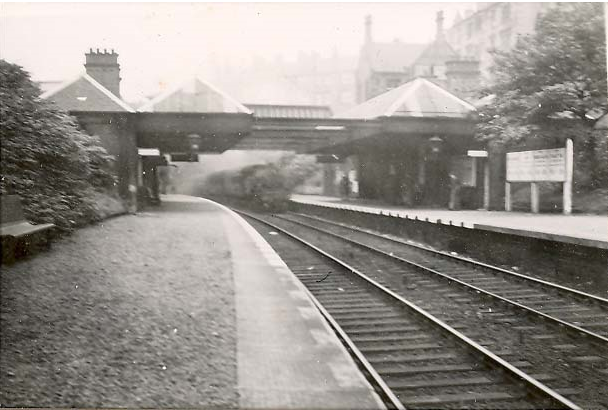 Scottish Referee 16th March 1894 is reporting a Match being played on Roslea Park.

Note to self – I don’t think this CP1 so is not the same Roslea Park?

Then we don’t hear anything until the 29th July 1898 when the Glasgow Herald reports that the linings to erect tenements and shops at the NE corner of CP1 are granted.

The shops and tenements at McDougall St later Malcolm Street. (note Newlands School in the background) Lord Newlands was to become our new landlord. 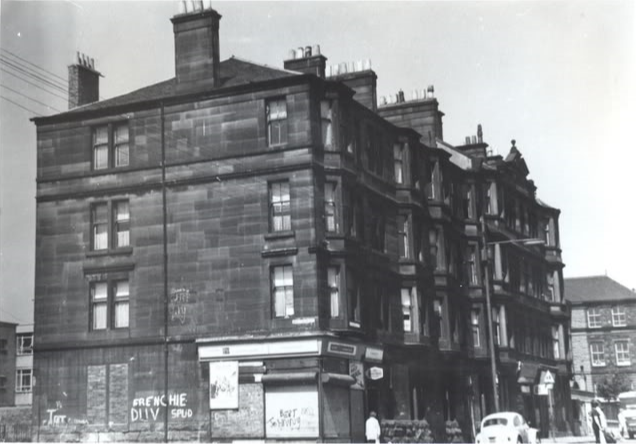 The first time we hear anything about a football team is in the Scottish Referee July 28th 1898. 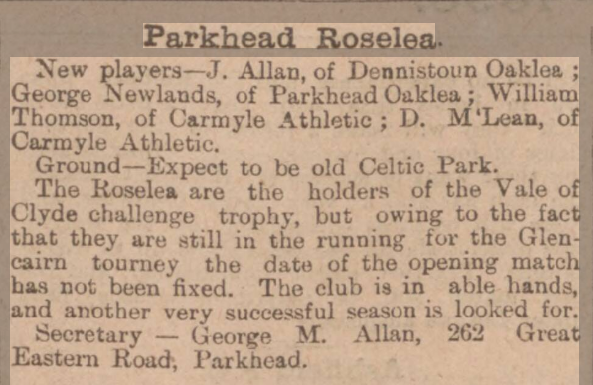 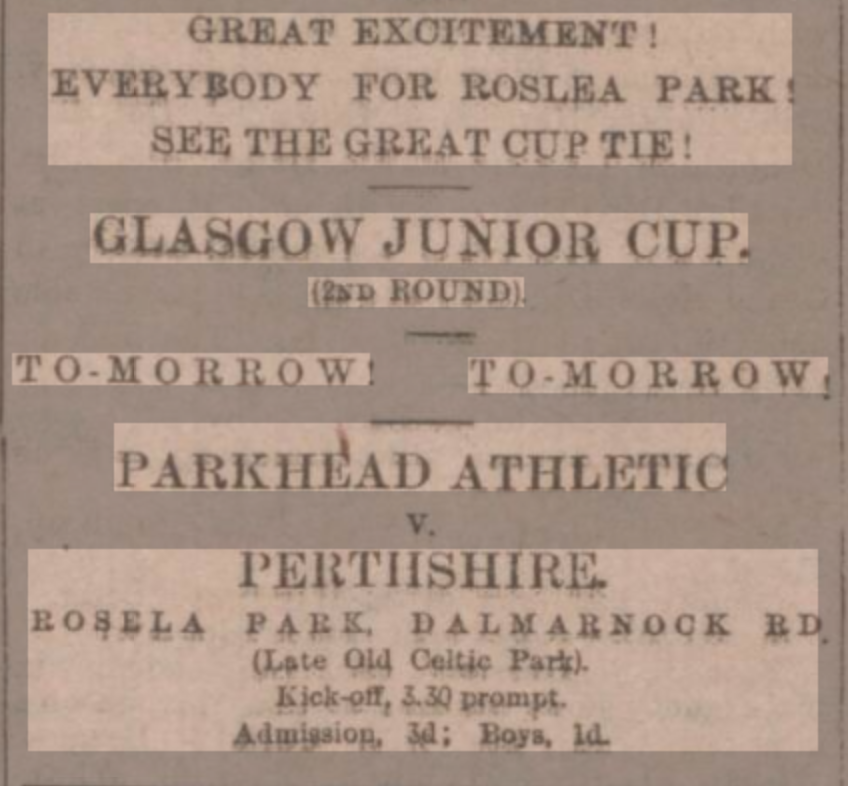 CP1 land has now been renamed Roslea Park – From the Referee 22nd October 1900.

What the papers say: 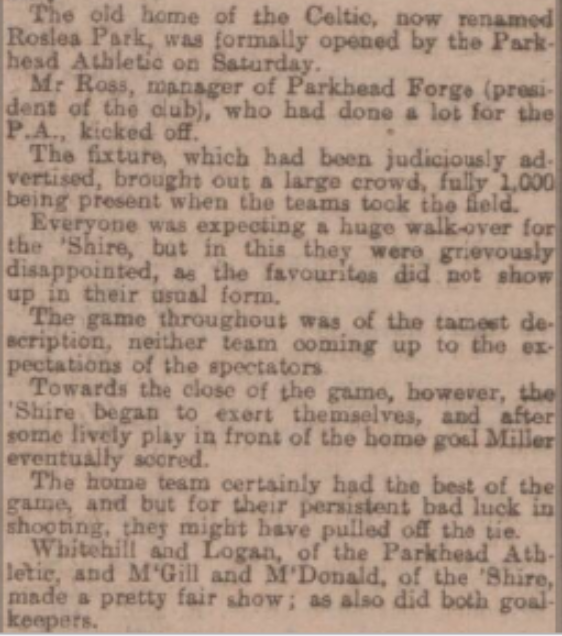 Then the following week its Scottish Junior cup tie against Partick 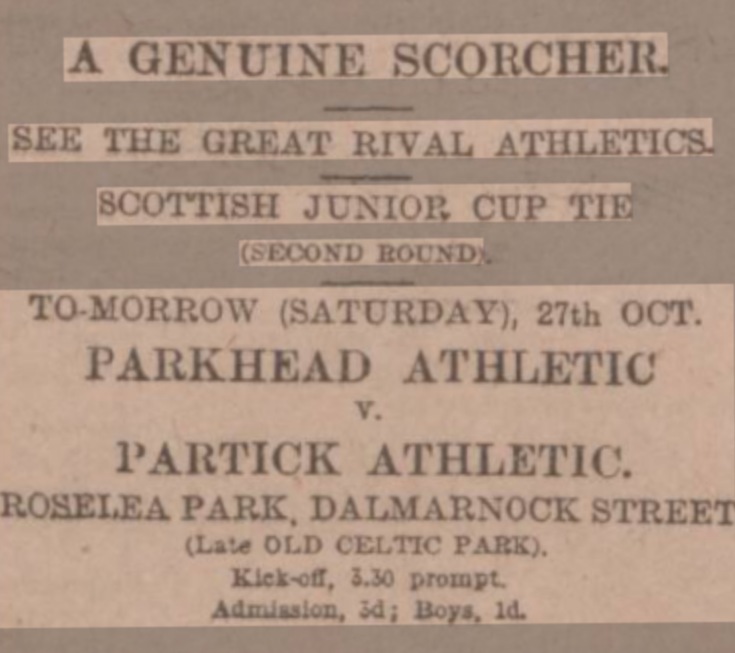 Then another game in December 1900. 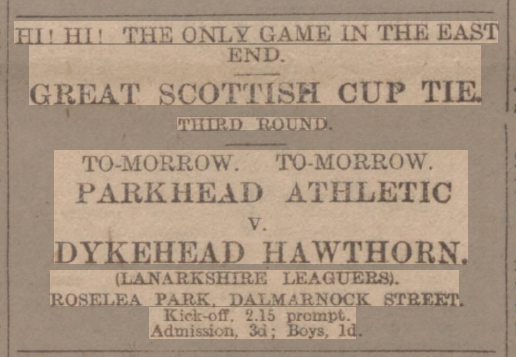 Scottish Referee Feb 1901 reporting that Dunfermline next up in the 5th round Scottish Cup tie. 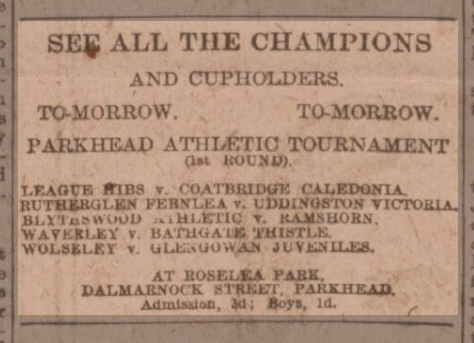 Scottish Referee 5th August 1901 is reporting that a press box is being built. (not for the first time I may add) 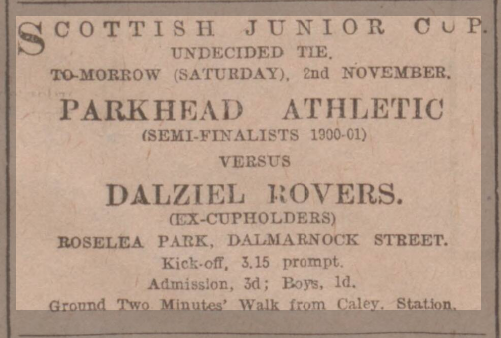