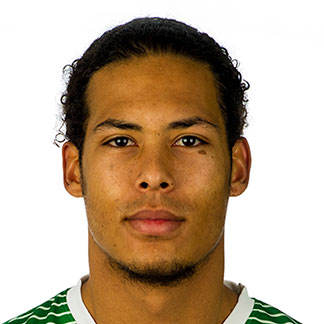 Virgil Van Dijk arrived at Celtic, as a work in progress. Mostly, ignored in his home country, he took a gamble to come to Celtic to prove himself and develop, and in quick time he grew to become a wonderful footballer.

However, early performances already marked his card high and opinion was overwhelmingly positive. Actually everyone had forgotten Wilson by now pretty fast after Van Dijk’s arrival.

For his debut, he replaced Efe Ambrose as a second-half substitute in a 2-0 win for the Hoops on August 17, 2013, and he was relishing his return north.

“My first game was Aberdeen away as well. I came on as a sub for Efe and it was a great feeling. After that it went like a rollercoaster.”

Van Dijk was a tall athletic figure, comfortable on the ball and in the air. Mature ahead of his time, he was a valuable player and a rising star. Composed under pressure and unafraid of making challenges, but also his timing for tackling was excellent. Many would rank him as the one of the finest defenders we’d had for the past ten years and easily the best player in the league.

As a measure of his attacking prowess he amassed a number of great goals too. As if he was showing off his previous skill, he scored a magnificent free kick against Hibs in Jan 2014 of a quality that even the much lauded Nakamura would have been proud of (i.e. postage stamp and all that).

Other notable goals include a cracking double v Ross County in a 4-1 win in Nov 2013 which sealed his first goals for the club, and a winning goal v St Johnstone in Dec 2013. He was always ready to lead the frontline in a set-piece for a chance at goal, and he had one hell of a good head for the shots.

He always looked happy too and smiled quite a bit, and this came out well on the pitch and made the support warm to him.

He had become the lynchpin in the finest Celtic defence for many a year. With a fine set of full backs and a good (albeit sometimes awkward) partner in Ambrose, the defence helped Forster break domestic records for clean sheets, and came close to the British and European records.

Admittedly when tested in Europe, matters were tougher and against sterner opponents it wasn’t easy. Yet he more than stood his ground and all rated him very highly and a standout in the Celtic side. Despite the tanking by Barcelona 6-1, Van Dijk came out of the match well. He was rated by all for his performances and was given commendations.

Bizarrely his national side was sticking its nose up at him. After all he had proven, he was still not awarded a set place in the Dutch squad for the forthcoming 2014 World Cup. They truly were ridiculous in this case.

The 2014-15 season started difficult under new manager Ronny Deila but soon enough with new defensive partner Denayer they struck up a formidable pairing. They set about brilliantly marshalling the defence and helped the club to an exceptional low tally of conceded goals in the league. The pair were perfect and were amicably as close off the field as on it. They were lauded to the heavens by the support.

So good, they were both nominated for end of season awards which were duly won by his defensive partner.

Against Dundee Utd in a two nil win the pairing teamed up to create a delightfully worked goal together This pairing was quite an asset, and in football such a goal created and sealed by a central defence is rare.

Inevitably, his form was going to be noticed, and his agent had already made noises about his forthcoming departure in the summer. There was little the club could do. Van Dijk had stated his ambitions to move on in time, and it was difficult to begrudge him that.

However, his final matches slightly dented his reputation. Celtic held onto him desperately wanting him to play in the competitive Champions League qualifiers for Celtic, a competition he had the quality to make an impression in. Sadly, his mind was made up on moving, and in the pivotal qualifying matches v Malmo his full concentration wasn’t wholly there, and many would contribute his errors as part of the reason for the side’s premature exit. It shouldn’t be held against him, as others were poor too. In any case, a poorly performing Van Dijk was actually still a class ahead of many defenders.

He was bought by Southampton for £11.5m in Aug 2015, and the Celtic support wished him well. A great footballer who was certainly to go on to some greater success.

[TBC…]
[…moved onto Liverpool for world record £75m transfer…. was rated best defender in the world…. played in European Cup final with Liverpool in 2018, but lost to Real Madrid who made history as first team to win the European Cup in the Champions League era, three times in a row…; but then helped them to the European Cup title in 2019 and finally the league title in 2019/20 season, their first since 1990….. Always spoke well of his time at Celtic.]

“When you play for Celtic, your love for the club never goes away.”
Virgil Van Dijk

“My first game was Aberdeen away as well. I came on as a sub for Efe and it was a great feeling. After that it went like a rollercoaster.”
Virgil Van Dijk

“Plenty will disagree with me, but Virgil van Dijk is vastly over-rated. A nice footballer, but too often gets found out by decent strikers.”
Journalist Tom English got proved badly wrong on this prediction (Nov 2014)

“I also have two members of my team at the moment who are always glued to the TV at our training ground when Celtic play, in Virgil van Dijk and Andy Robertson. Virgil is an ex-Celtic player, of course, but Robbo is just a massive, massive Celtic fan. So I get to hear lots about Celtic. In Robbo’s case, he talks constantly about it, even when you don’t ask, and all I hear is that it is a special club that has a lot of heart and soul. So I’m really looking forward to getting my own experience of this.”
Jurgen Klopp (Aug 2018)

“Celtic are a massive club and people underestimate them sometimes. It’s such a historic club and a great environment. The fans are outstanding, the stadium is amazing and to get Champions League in my first season there was great for my development.”
Virgil Van Dijk (2019)

Netherlands Under-21 centre-back Virgil van Dijk has signed a four-year contract with Celtic.

The 21-year-old has joined in a £2.6m deal from FC Groningen, for whom he made 37 appearances last season, with a 10% sell-on fee for the Dutch club.

“It feels very good and I’m very excited to be here,” he said.

“I’m a strong defender and I’m good in the air, but I also like to play football on the ground, and I hope that we’ll do even better than we did last season”

Van Dijk moved to Groningen from Willem II in 2011 and had two years left on his contract at FC Groningen.

“Celtic is the biggest club in Scotland and they also play in the Champions League,” he said.

“They’re a fantastic club and when Celtic came in for me I was so excited. Everything here is good so I can’t wait to get started.

“I hope to play many games for my country in the future but first of all I want to make things happen here.

“I’m a strong defender and I’m good in the air, but I also like to play football on the ground, and I hope that we’ll do even better than we did last season.”

With central defenders Thomas Rogne moving on, Rami Gershon’s loan expiring and Nigeria international Efe Ambrose missing the start of the season while he plays in the Confederations Cup, Celtic manager Neil Lennon has moved swiftly to ensure there is cover and competition for places for the forthcoming season.

Centre-half is Kelvin Wilson’s natural position while Charlie Mulgrew can play there, at left-back or in a more advanced position.

The Champions League qualifying draw will be made on 24 June, with Celtic’s first match scheduled for 19-20 July.