The opponents were really a Rangers XI composed from most of their first team players and some of their reserve side (who called themselves “The Swifts“), likely as they didn’t want to lose to a new outfit (just in case). The game was advertised as being against “a side of Rangers“. This though is partly disputed, see analysis article at the bottom of this page. You can say that it was a ‘scratch‘ side at least, it was a late season friendly invitation match and not a competitive game which were few at that time as the Scottish league had not yet begun. In any case, the side was still representing Rangers, so this is a first team Celtic v Rangers match.

Celtic wore white shirts with a green collar and a red and green Celtic cross on the breast (see right). These were given to the club by Penman Brothers from Bridgeton Cross.

Neil McCallum had the honour of scoring the first Celtic goal, a feat of which he and all others attending on that day likely will never fully have known the importance of it for the whole of Scottish footballing history and to the many fans to come. One goal was chopped off for being offside which became the standard for Celtic in years to come in games against Rangers!

Due to that the team was formed within Irish circles in Scotland, the players were all picked from respective clubs with Irish social and Catholic church links, and so naturally the team was thus composed of players who were from that community and so were Roman Catholics. This was due to circumstances alone and there is no record of any policies to say otherwise.

Non-Catholics played for the side very soon enough, and no policy was ever put in place to stop any being allowed to play for the club at any point in our history, a standard by which has been a hallmark of Celtic FC where “a man is judged by his football alone!”

An attendance of 2,000 watched the game. It´’s thought that the 2,000 attendance could have been greater but for the International Exhibition taking place the same day through in the West End.

Response to the game was positive:

“It would appear as if the newly-formed Glasgow club, the Celtic F.C., has a bright future before it.
“At any rate, if the committee can place the same eleven in the field as opposed the Rangers last Monday evening, or an equally strong one, the Celtic will not lack for patronage and support.
“A good team is essential to success, and this fact the committee have not lost sight of.
“It will be interesting -to many of our readers to know the composition of the team which represented the new organisation in its first club match.
“Here it is :—Goal, Dolon (Drumpellier) ; backs, Pearson (Carfin Shamrock) and McLachlan (Whitefield); half-backs, Maley (3rd Lanark), Kelly (Renton), and Murray (Cambuslang Hibs.); forwards, McCallum (Renton), Maley (3rd Lanark), Madden (Dumbarton), Dunbar (Hibs.), and Gorevin (Whitefield)—a pretty good eleven.
“The Rangers were without D. Gow, J. R. Gow, Hotson, Peacock, Allan, and Aird ; but had Suter (Partick Thistle) doing duty—the remainder being drawn from the Swifts.
“The match was a capital one, fast and friendly—the home organisation playing with a combination which could scarcely have been expected for an opening display.
“The Celtic retired victors by 5 goals to 2—a result which must be indeed gratifying to their supporters.
“After the match, over 70 gentlemen sat down to supper in the Hall, East Rose Street, where a pleasant evening was spent. Dr. Conway occupied the chair, and on the platform were also Messrs. M’Fadden (Hibs.), McCulloch (Our Boys), Grant (Rangers), and the Rev. Brother Walfrid.
“The latter gentleman, who took a deep interest in the origin of the club, has every reason to flatter himself as to the success of the Celtic. Long may it flourish in our midst.”
(The Scottish Umpire (magazine) 5 June 1888)

Goals: McCallum, James Kelly, Tom Maley (x3)
McCallum scored 1st with Kelly scoring our 2nd goal, Tom Maley is credited with the next goal with the other 2 goals also scored by Tom Maley.

The Rangers kicked off against the wind and at once made an incursion into Celtic territory. With some difficulty Dolan and the backs cleared their charge and play was transferred to the other end. A mistake by Meikle gave the Celts a corner kick. Dunbar placed the ball in front of goal and McCallum was enabled to head the first point of the game.

The Rangers, after a pass by Suter, equalised after ten minutes play. Nicol was saving in grand style and , but for his clever goalkeeping, the Celts must have increased their score on several occasions.

A foul against the light blues further enhanced the prospects of the home team. The ball was kept in dangerous proximity to Nichol’s charge and to avert what proved to be only a temporary and insufficient relief, the Rangers were forced to concede a corner kick. Like the former, and placed by the same player, Kelly, who was playing a judicious game, headed the second goal a few minutes before half time.

The Rangers opened the second half with great vigour. The home defence, however, was not to be overcome. By short passing and keeping the ball low, the Celts carried it to the other end where Tom Maley was enabled to score another goal.

In retaliation the Ibrox forwards were soon in front of their adversaries’ upright and a second goal was registered by Suter. Ultimately, Maley put in a fourth goal for the ground team. Through the instrumentality of McCallum the same player shortly afterwards notched a fifth point. A sixth point was put through but was disallowed owing to an infringement of the offside rule. The whistle sounded with the ball hovering in front of Dolan. 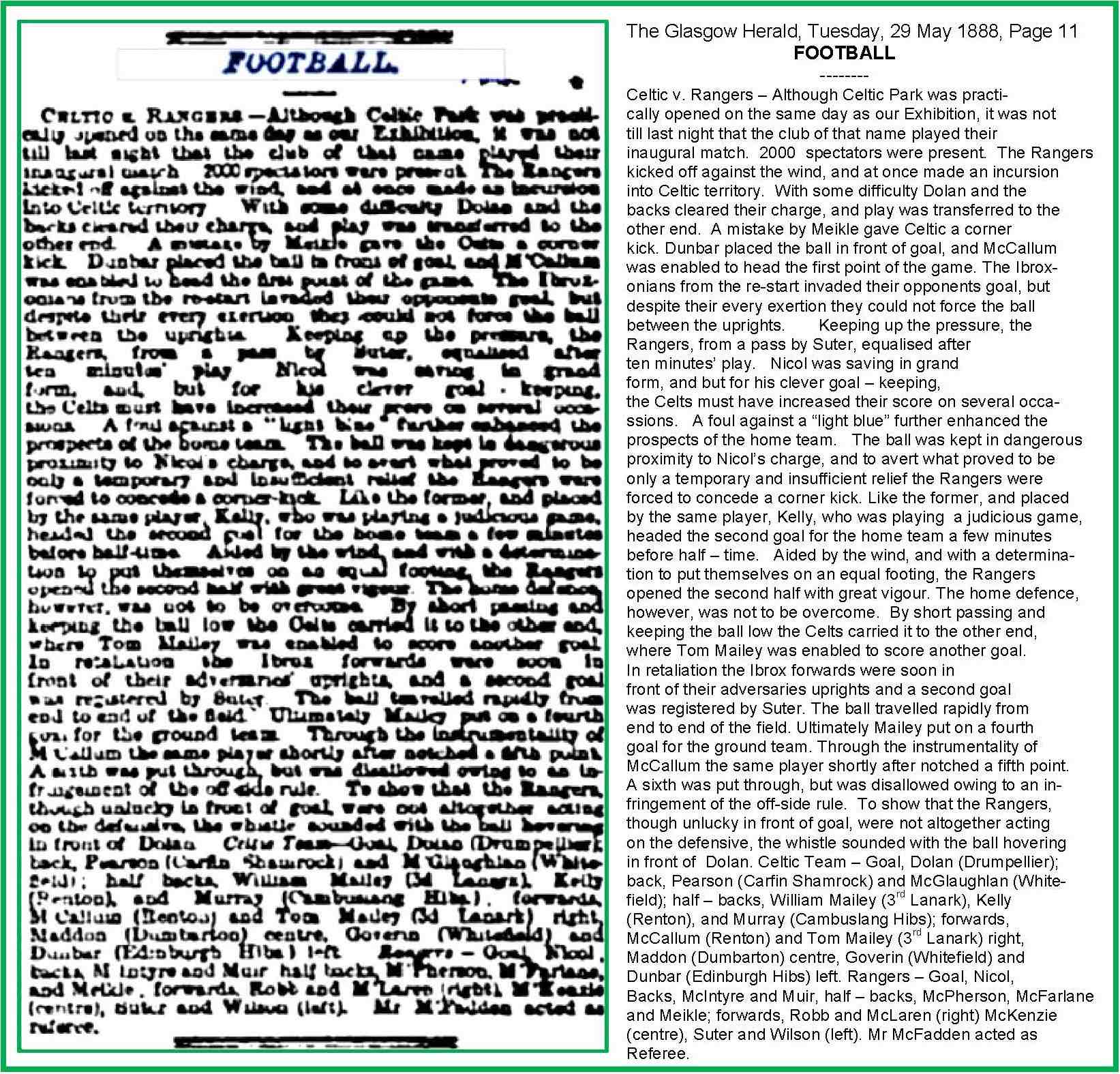 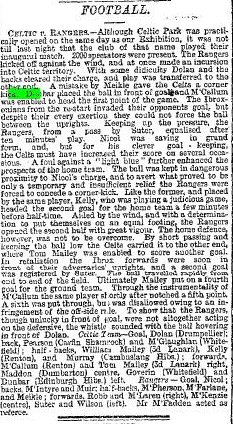 Was it the Swifts we played that Monday Night?

Celtic v Rangers 28th May 1888 is a game I have been researching for a wee while, can actually remember going into Dennistoun library as a 15 year old and asking them if they had any match reports on the first ever Celtic v Rangers match, the reply was there was only one and i should ask at the Stirling Library in the town, many years later i asked the same question at Parkhead Library and was given a similar reply with a added bonus that i should jump on a bus to Baillieston and ask for Pat Woods the librarian and he will tell me everything i want to know about the Celtic, Pat confirmed that there was really only one match report and i would be basically wasting my time looking for a different variation of what was reported in the Herald and the Glasgow Observer at the time. After convincing myself no other match reports existed I left it at that.

Many many years later I started reading the history of Rangers in the hope that would tell me something that I did not know about that match, Something that kept coming up and it was bothering me that reports kept saying that Rangers played a reserve team naming them as the Swifts, about a year agoI decided i would do a wee bit of research on the Rangers team that played that day and this is basically my findings although it is far from being exhausted.

As we already know there was no league in them days and the big games were the Scottish Cup followed by the Glasgow Cup and the Glasgow Merchants Charity Cup. We all know this was the very first match for Celtic and every one of our players was a guest, Rangers had played something like 30 friendly matches that 1887-88 season and 15 cup ties. They played Celtic in their 30th and last friendly game of that season.

Lets start with their Goalkeeper

Jimmy Nicol: A regular who played in every single cup tie and its been confirmed he played in 14 of the friendly matches, 9 of the matches for that season the team are untraced so we got to assume he played in almost all of them, definitely a regular who also played in goal for them the following season.

Tuck McIntyre: Played in 18 friendly games and in every Cup Tie that season, again got to assume he played in most of the untraced line-ups, definitely a regular and described by Rangers historians as the most loyal and talented servant who stayed with the Rangers through the best and worst of times.

John Muir: Played in 17 friendly games and in every Cup Tie that season, again got to assume he played in most of the untraced line-ups, definitely a regular.

McPherson: Ok we will give them this one as i only know he played as the No.4 in this match and nothing to tell me he played in any other first team matches that season.

Meikle: Played in the first game and last game of that friendly season, also played in one of only 2 Scottish Cup ties they played that season and in a Glasgow Cup game.

Robb: Ok we will give them this one as i only know he played as the No.7 in this match and nothing to tell me he played in any other first team matches that season.

McLaren: Ok we will give them this one as i only know he played as the No.8 in this match and nothing to tell me he played in any other first team matches that season.

Alick McKenzie: Played in 11 friendly games and 5 Cup Tie that season, again got to assume he played in some of the untraced line-ups, definetely a regular and another described by Rangers historians as the most loyal and talented servant who stayed with the Rangers through the best and worst of times.

Suter: Scored the 2 goals that day and wore No.10, No record of him playing another game although there was a player named Settar who played as a No.9 for them that season.

Wilson: Ok we will give them this one as i only know he played as the No.11 in this match and nothing to tell me he played in any other first team matches that season. 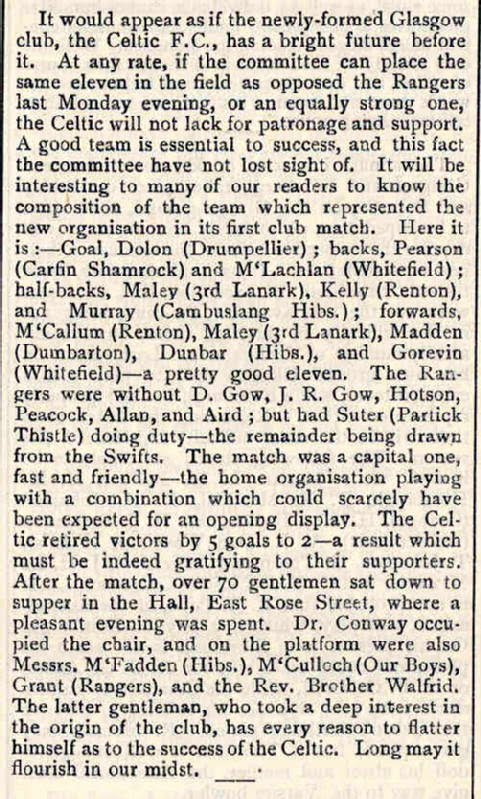 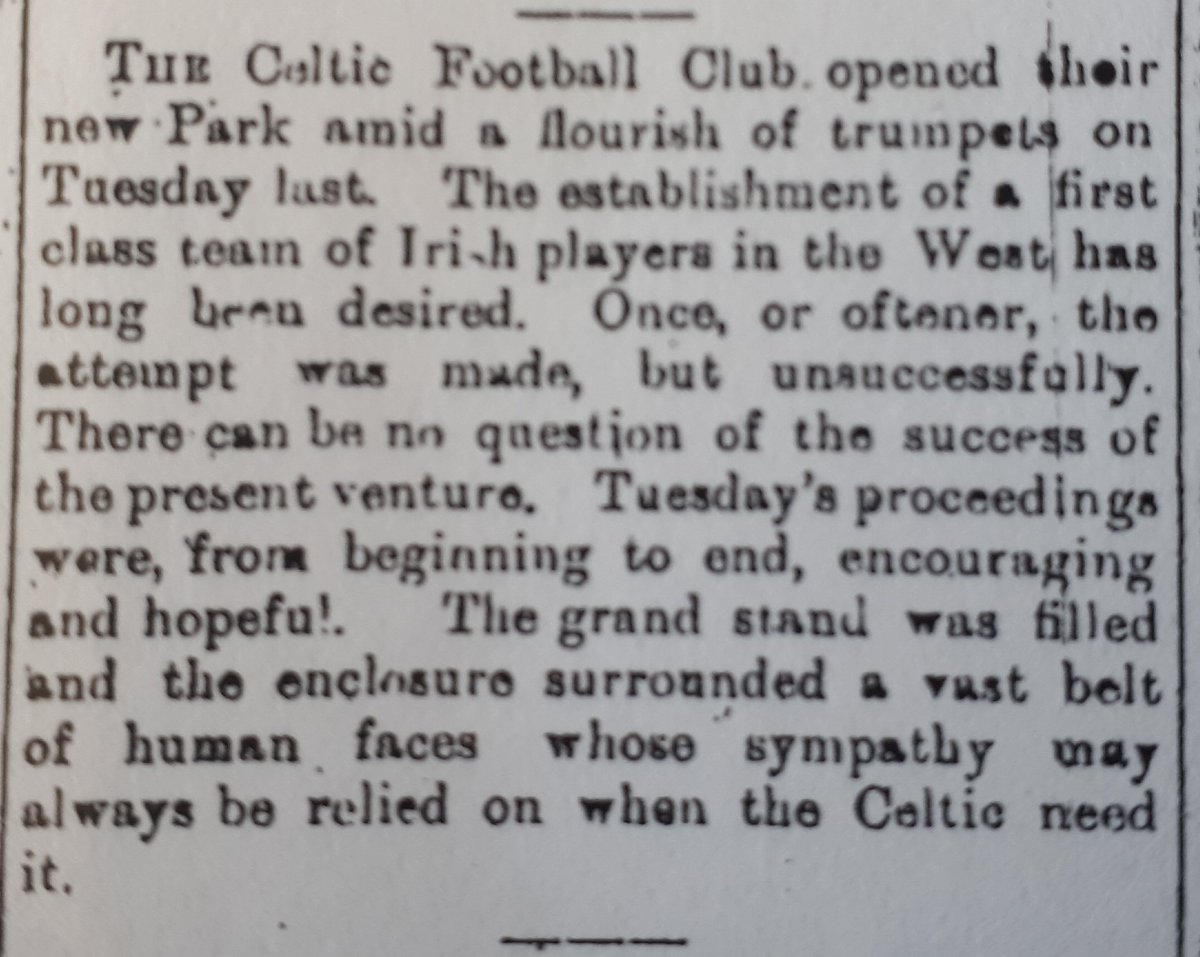