For the previous 4 seasons (1888-1892), Celtic Park had been situated a little less than 500 metres away on the north east corner of Springfield Road (then known as Dalmarnock Street) & London Road.

That “first” Celtic Park had been built on land leased from a private landowner within a week of the Club being formed. In less than six months, a voluntary workforce had built a stadium that matched the highest standards of the time.

There was a level, grassy playing field measuring 110 yards long and 66 yards wide, basic earthen terracing around three sides of the stadium and an open-air stand (capable of accommodating 1,000 spectators) that contained a pavilion, a referee’s room, an office, dressing rooms and washing and toilet facilities.

The first match on the original ground was between Hibernian and Cowlairs, before a crowd of 3000, and ended goalless, and The Scotsman had the following report: 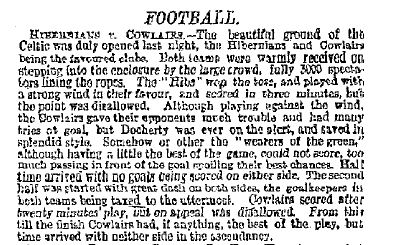 The landowner seeing the revenue being raised by the crowds flocking to see the sensation that was Celtic, raised the ground rent from £50 per annum to £450. The then Celtic board were naturally unhappy with this, and taking advantage of land available nearby to the west, relocated. Once again utilising a volunteer workforce, a second Celtic Park was built in time for the start of the 1892-93 season. The new ground was opened on the 13th of August with the club’s annual Sports Day.

“The capacity of Celtic Park is 70,000 and, odd though it would seem to those who laid out the ground, this is too small to meet the needs of all those who want to attend International Matches and Cup finals. So Celtic Park houses fewer “big events” than formerly, and its remarkable history is perhaps not known to the younger generations of Glaswegians. The last International match with England played there was in 1904, but it still takes some League Internationals with England and International matches with Ireland. The ground itself was actually built over a quarry hole in the early ‘nineties, and it seemed so palatial, in odd comparison with an adjacent graveyard, that it was described as the “Paradise”. The first double decker stand at a football park was erected at Celtic Park in 1898, but it was burned down in 1927, and has since been replaced by a larger but single storyed stand.”

To gain extra revenue the new Celtic Park had a cycling track around the perimeter of the football field, and in the late 19th Century, Celtic hosted many competitions. More here Cycling Track

The Grant Stand is on the Right 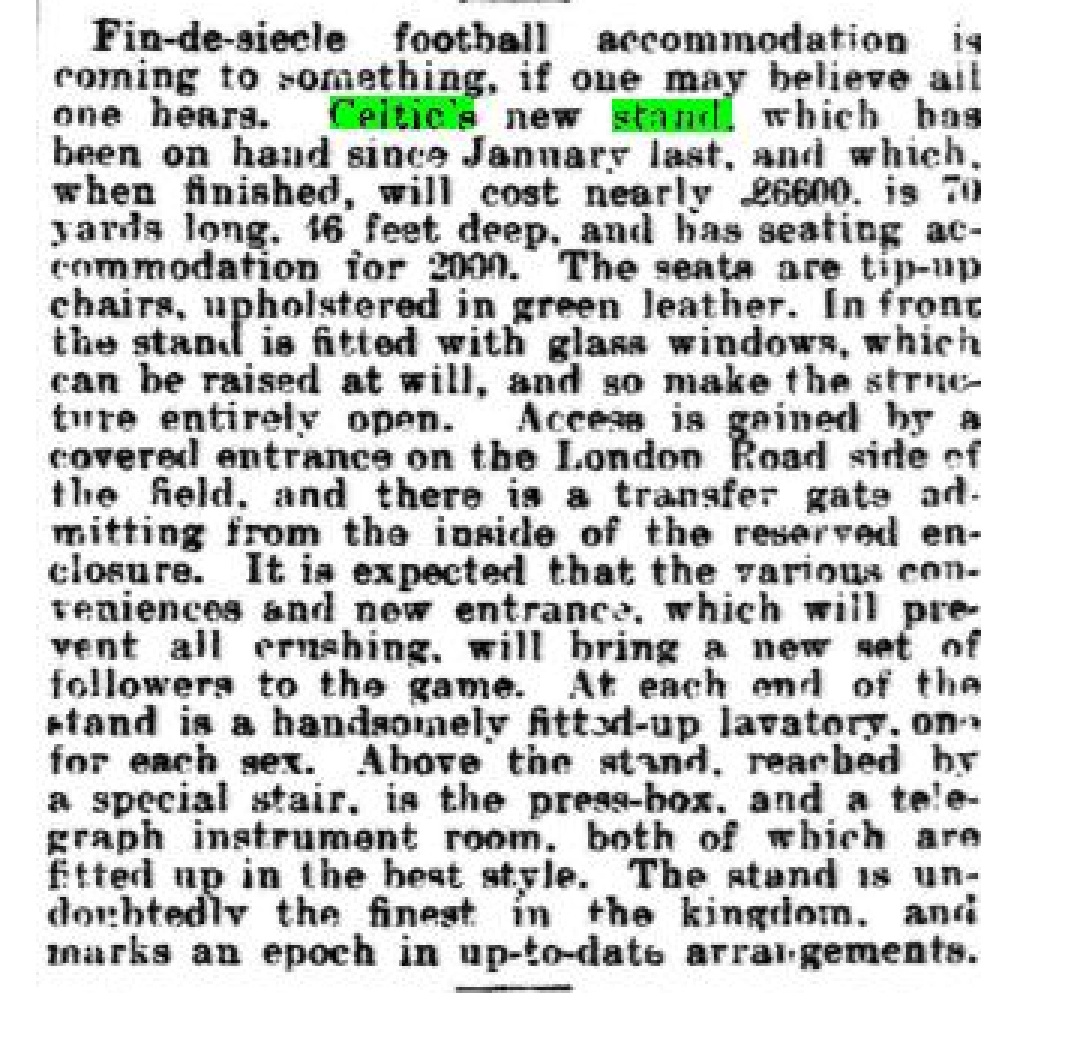 The Scotsman – Tuesday, 10th May 1904, page 4
The principal stand at Celtic Park, Glasgow , belonging to the Celtic football club, was destroyed by fire yesterday evening. The pavilion also suffered damage, the total loss being estimated at about six thousand pounds 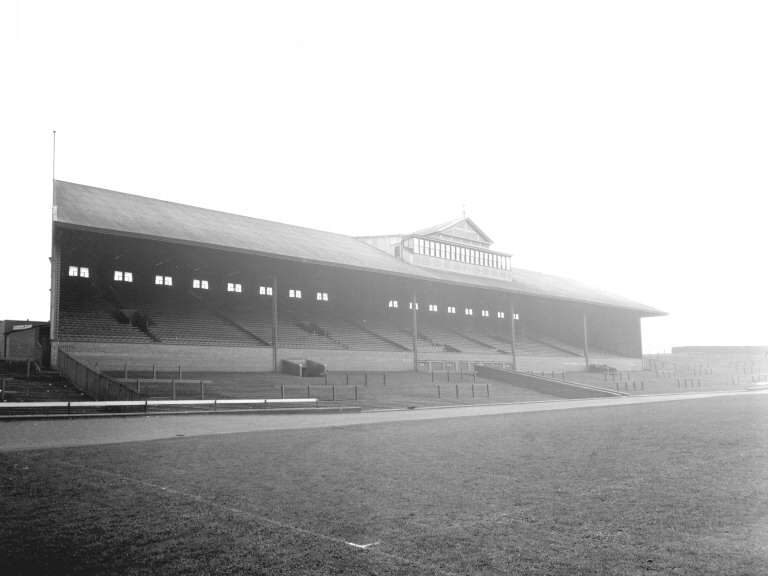 This is the single tier stand mentioned by C.A.Oakley, built in 1929 replacing the one destroyed by fire, two years earlier.
The banked cycle track can still be seen rising at each side. 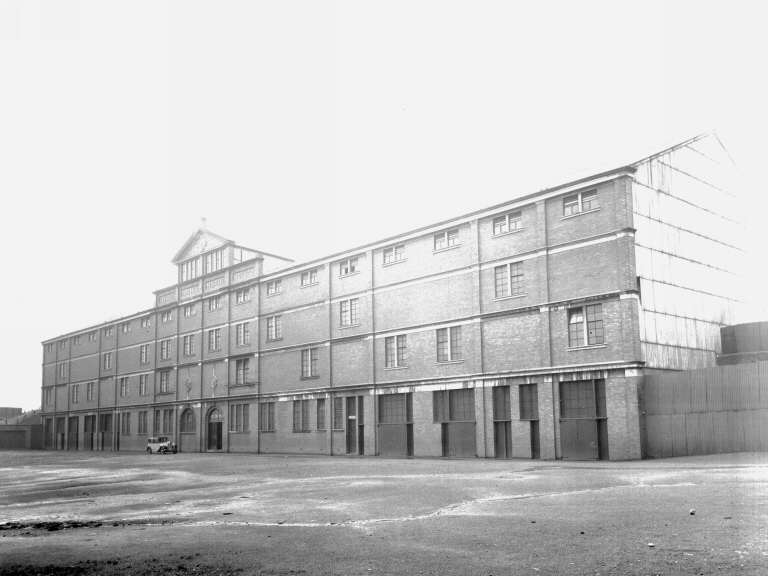 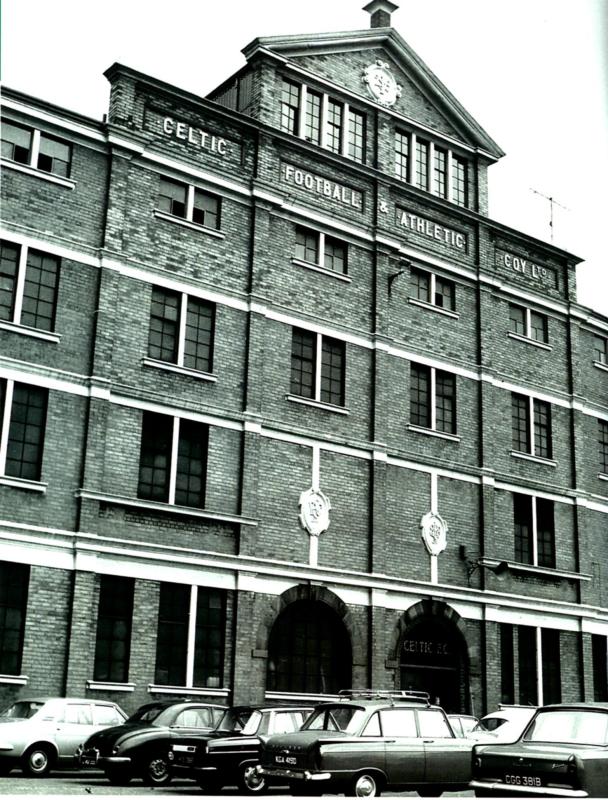